The Airfix Seasprite is a superb model, definitely one of Airfix' best.

The Seasprite was the US Navy's equivalent of the Westland Lynx; never quite as capable, successful or numerous, nevertheless, it continues in service today with the Egyptian, New Zealand and Polish Navies, nearly 50 years after it first flew. Although the Australian Navy recently tried to bring it into service for their smaller ships, they were very disappointed by the performance of their early deliveries and cancelled the entire order in 2007.

The Seasprite started life as a SAR and utility helicopter, but an up-engined variant, fitted with radar and carrying ASW weaponry was selected in the 1970s as the basis of the US Navy's LAMPS (Light Airborne Multi-Purpose System). With its emphasis on Carrier Battle Groups and high-end ASW, the USN was never entirely sold on the light and small Seasprite and it retired them in favour of the far more capable and larger SH-60 Seawawk in 1993.

The Bell Huey Cobra was the original Western attack helicopter. Based on the airframe of the proven UH-1 Huey utility helicopter, it entered service toward the end of the Vietnam war. The improved AH-1W version was created for the US Marines in the early 1980s, and features twin engines and a longer tail boom.

Airfix 1/72, largely out of the box. Scratch detailed interior:

Kamov OKB's contra rotating rotor designs are well suited to the anti-submarine role, allowing aircraft to hover safely and in extreme weather conditions. Based ashore and at sea, the Hormone was the main Soviet and Eastern Block ASW platform during the Cold War .

The Helix was introduced in the 1970s as an upgrade to overcome the bad weather and night operation limits of the Hormone.  The external dimensions of the earlier aircraft were retained to enable compatibility with existing ships and their hangars, whilst fitting much more powerful engines and rotor blades as well as a significantly bigger cabin to carry additional ASW equipment and systems.

This is the delicate and nicely detailed 1/72 Revell EC135VIP, modified into my local Western Counties Air Operations Unit Police Helicopter. The EC135 is widely used by Police Forces across the world, and this particular one is a common site over the skies of the Avon & Somerset and South Gloucestershire Policing areas, and seems to spend a disproportionate amount of time hovering around my house! Link to Build Page

In the late 1980s, Westland Helicopters were struggling to stay in business. Having worked with Sikorsky in the past (the Dragonfly, Whirlwind, Wessex, & Sea King were all based on Sikorsky designs) they began to forge even closer links with the US firm and its owners. As part of this arrangement, Westland gained the European manufacturing rights to the S-70 Black Hawk design and set about marketing it to European nations as a replacement for the Wessex/Puma class of medium support helicopters. 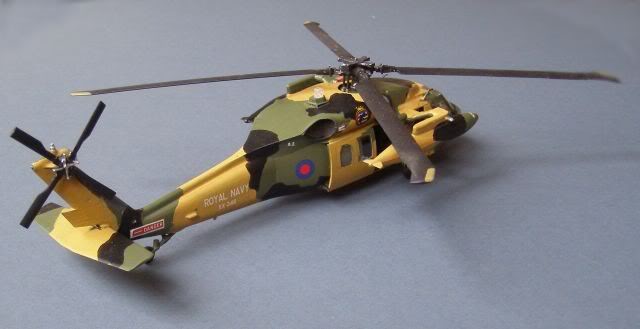 However, Westland's efforts met with strong opposition - the Gulf War proved that larger helicopters (in the Chinook class) were required and the RAF was adamant that it wanted Chinooks, and would not take the Black Hawk under any circumstances (although it was later forced to adopt the Merlin HC.3 instead). The political arguments around Westland's ownership led to a bitter split in the UK Conservative government, with the furious resignation of Defence Minister Michael Heseltine, who had championed the retention of an independent UK and European aircraft industry, as well as Trade and Industry Minister Leon Brittan, who favoured the US deal. For many political commentators, the Westland Affair, as it became known, was the beginning of the Conservative Party revolt that would lead to Prime Minister Margaret Thatcher's peremptory removal from power in 1991.

In the end, the WS-70 design could not be sold in the competitive and nationalistic European market, and was quietly dropped from the Westland catalogue when the company transferred back to European ownership. 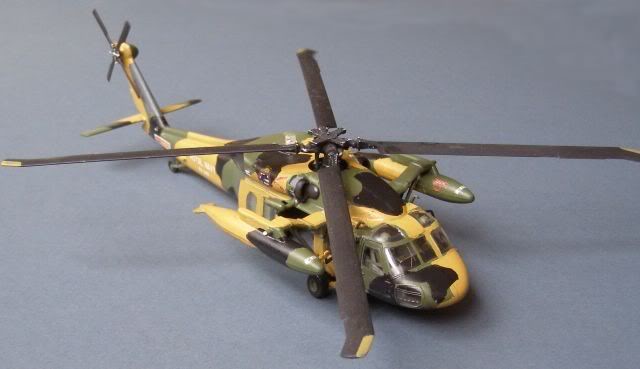 Hobby Boss 1/72 with own decals and scratch additions. (Link to build page)

The highly successful Mil Mi-17 helicopter is a development of the Soviet era Mi-8 troop carrier that first flew in 1961. The improved and up-engined Mi-17 followed in 1975, entering active service 5 years later, with over 12,000 built to date.  Designated by NATO as the "Hip-H" it remains in active service around the world, with new aircraft being ordered as recently as 2021.  In Russian service it is known as the Mil Mi-8MT, with the Mi-17 designation reserved for export aircraft.

Ukraine is (or was) a major user of the Mi-17 with most operated by the Ukrainian Army Aviation, although a smaller number belong to the Ukrainian Air Force. After 5 months of Russian attacks, It is not clear how many Ukrainian Hips remain operational, although it is reported that many more are being supplied by friendly countries to replace losses.

Click on the icon or scroll down to see the models