Click on the thumbnail below to go directly to the aircraft model, or simply scroll down

The Airfix Firefly is nicely detailed for its time, and a straightforward build, with a very nice wing-fold option (see also my MkV). This one is a conversion to a Mk.4 and adds the Airwaves photo-etched wing fold set.  Link to build page

The FROG Firefly is not as sophisticated as the Airfix model, but still a reasonable build (see also my Mk 4 above and MkV). This one is marked up in a post-war scheme.  Link to build page

The Airfix Firefly is nicely detailed for its time, and a straightforward build, with a very nice wing-fold option.

The Rolls Royce Griffon-powered Firefly continued the FAA policy of large 2-seat Fighter-Reconnaisance aircraft, started with the Hawker Osprey. Built to replace the Fulmar, it was a far better aircraft, particularly well suited to open sea and long range missions. By the start of the Korean War, the Royal Navy was mainly using the later Mk.V variant, with its clipped wings and wing-root radiators. Fireflies were particularly active over Korea, providing close support to Korean and UN ground forces.

HMS THESEUS arrived in Korean waters in October 1950 to relieve HMS TRIUMPH, with her Sea Furies and Fireflies conducting intensive strikes on North Korean bridges and vehicles. THESEUS' Ship's Company were confident that their Korean War mission would end soon and that and they would be on their way home, hopefully via an Christmas stand-off in an exotic far-east port (Hong Kong was the favourite). But with massive Chinese intervention in the war, UN forces were again being pushed south so after a very brief New year rest in Japan, THESEUS and her aircraft were back in action, operating from the Yellow Sea as the bitter Korean winter set in. Twelve of THESEUS aircraft were lost to a combination of ground fire, air to air combat and accidents during this period of combat, which was to last another full year. THESEUS finally left Korean waters to return to Rosyth for refit in January 1952.

Trumpeter's Sea Fury is a huge step forward from the ancient Frog offering and a big step on from the reasonable PM version. However, it is certainly not "Shake & Make" with a number of fit and detail issues to be resolved. Painting that high demarcation line on the fuselage is very frustrating; I had just got it right when the masking tape took off all the sky paint - aaargh!

Many people consider Sir Sidney Camm's Sea Fury to be THE ultimate piston engine fighter. Conceived during the final years of WW2, it was a typical Hawker design; robust, well thought out and highly capable. When it entered service in 1947, the utility of jet aircraft at sea was yet to reach a satisfactory level, but it was clear that the Sea Fury's days would be limited.

Nevertheless, its six years of front line service co-incided with the Korean War, where Sea Furys, operating from HM Ships GLORY, OCEAN, THESEUS and HMAS SYDNEY, proved highly effective in the ground attack role. They also achieved a startling victory, when 4 aircraft of 802 Sqn, (Lts Carmichael & Davis, plus Sub Lts Haines & Ellis) shot down a Korean MiG 15 fighter that was attacking a mixed formation of Sea Furys and Fireflies.

Note: It has been suggested that Lt Carmichael's aircraft had a blue spinner, to reflect his position as Blue Flight Leader. However, evidence for this is rather scant, it would be a unusual move and even if it was coloured, then there is no way of knowing what sort of blue this would be. I have therefore gone for the standard EDSG spinner as I think it more likely (e.g. faded EDSG can look decidedly blue).

The PM Sea Fury is considerably cheaper than the Trumpeter, and a much easier build. This one is essentially out of the box, but with my own decals.

The original Sea Fury X / F.10 was intended as a pure fighter and lacked the underwing hard points for ground attack weaponry. However, its stretch potential was quickly realised and most F.10s were quickly converted to FB.11s.

PM's 2-seat Sea Furies use the same wings etc, but a modified fuselage.

The RN found that the high performance Sea Fury required a dedicated 2-seat trainer, so an extra cockpit was grafted on and equipped with a raised periscope gun sight reflector to allow the instructor to see the same view in the gun sights as his trainee. Only 2 guns were fitted, to allow relocation of equipment displaced by the second cockpit.

This particular aircraft was operated by the RN Historic Flight until it was written off in a crash in 1990. It has since been rebuilt by an American collector and is currently (2008) for sale.

AZ 1/72 Spiteful modified. The planned main production variant of the Seafang would have been the Mk.32 with contrarotating props and folding wings, but to enable early entry into service, the initial Mk.31 was a basic version, essentially a Spiteful with a hook. 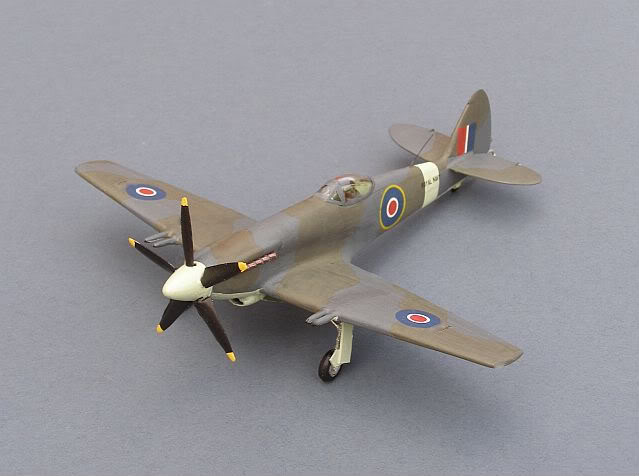 The Seafang and Spiteful were the last gasp of the Spitfire line. By 1943 it was evident that the Spitfire airframe had reached its physical limits, so Supermarine began work on an advanced wing to allow far higher speeds. The laminar flow wing was thinner, with a sharper leading edge and with its thickest part further aft. By allowing the air to flow around the wing with less turbulence, drag would be reduced and the top speed of the aircraft would increase. At the same time, the overall shape and construction of the wing were simplified, overcoming a long lasting production limitation of Mitchell's original Spitfire wing design. A new fuselage was also designed, with a lower nose overcoming the visibility issues that the longer Griffon engine had brought, whilst a larger tail unit restored the longitudinal stability lost with the more powerful engine and the bubble-top after deck. 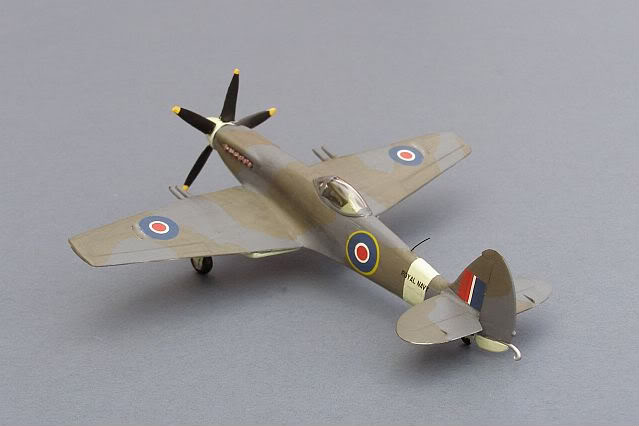 The Spiteful and Seafang were modestly successful and were certainly very fast, although the new wing showed some undesirable characteristics when approaching a stall. None of these were significant issues for such a radical design and could have been overcome in time, but the end of the war, the emergence of jet technology, plus the success of the rival Hawker Fury/Sea Fury and Seafire 45/47 designs, meant that further development of the aircraft was halted after only 19 had been built. 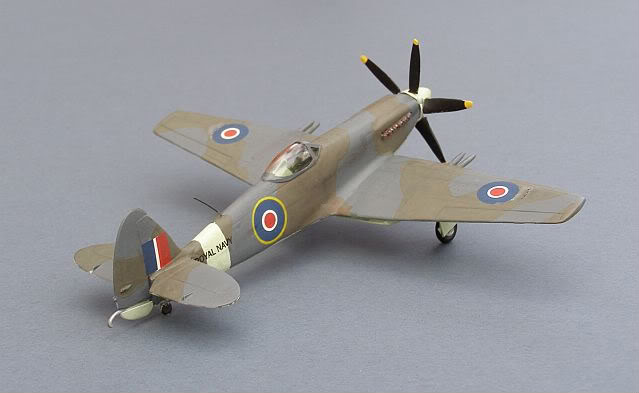 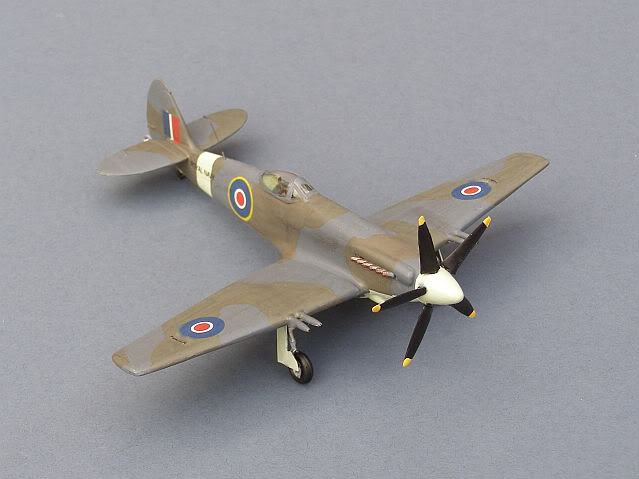 PM models have a very mixed reputation, ranging from OK to very poor.  Their C-45 and AT-11 kits are at the better end of the spectrum, with reasonable shape and fit.  As supplied, the kit can be built as an US Navy example, or an RAF version from India Command in 1942.  This one has a set of home-made (inkjet printed) decals for an RN version.

The Beech Model 18 saw widespread military and civilian use as a light communications transport and trainer. It remained in production from the late 1930s until 1970, holding the record for the longest continuous production of a piston engined aircraft.

This is the recent Airfix kit , which is most impressive.  Slightly delicate, so not the easiest of builds, but the results are very pleasing.  As supplied, the kit comes in 3 variants; two RAF Trainers and a civil version; this one has some home sourced decals from the spares box.

The Tiger Moth first flew in 1931 and was quickly established as a leading primary trainer across the world.  Over 500 were in RAF service alone by the start of WW2 with an eventual production run of over 7,000, over 4,000 of which went to the RAF. Tiger Moths were built in the UK by DeHavilland, Morris and Scottish Aviation, in Canada by DHC, in Australia by DH Australia as well as  in New Zealand, Sweden, Portugal and Norway.

The Royal Navy used a small number of Tiger Moths as target tugs and "air experience" machines. With an additional batch of purchased a batch of refurbished ex civil examples purchased in 1956, one of which made the last biplane landing on an aircraft carrier (HMS Eagle)in 1967.

Several air experience and hack aircraft remained in Fleet Air Arm service until the early 1970s including the subject of this model which started out as an RAF aircraft with serial DE395. After disposal by the RAF and refurbishment by Hants & Sussex Aviation, it was purchased by the RN and given the new military registration XL715.  Unfortunately, the aircraft was damaged beyond economical repair in a crash shortly after take-off in August 1962 in France.

Valom’s Firebrand kits are definitely short-run, but  with some care they build into good replicas.  Link to build page

Frog's kit of the DH Hornet, in this case an early Novo issue, is another excellent example of late Frog quality. Certainly, it is basic, but it fits together well (even in this Novo incarnation) and is reasonably accurate. The very few panel lines are raised and perhaps a little heavy, whilst comparison with a set of basic drawings suggests that the nose may be a little too short, but overall the kit captures the shape of this now extinct aircraft well enough. This is a simple conversion into a Sea Hornet, by adding wing fold lines, a hook and my own decals.

As the tide began to turn in the WW2 Pacific Campaign, British aircraft manufacturers turned their efforts to designs that would be well suited to the vast distances of the Pacific. DeHavilland's contribution was one of the fastest propeller driven aircraft ever built, the elegant DH.103 Hornet, developed from the famous wooden wonder Mosquito.

Smaller, but with the same Rolls Royce Merlin power, now in even more streamlined engine nacelles, and the same lightweight wooden construction, the Hornet was remarkably fast, with an astonishing power to weight ratio and possessed a tremendous operating range (nearly 2000 miles with drop tanks fitted). Indeed the Hornet was significantly faster than the contemporary jet powered Gloster Meteor, achieving a top speed of 472mph at 22,00ft against the Meteor's 415 mph.

The Sea Hornet was a simple conversion to add a hook, catapult spools, revised hydraulic undercarriage oleos and naval radio equipment. Sea Hornet F.20s served for a relatively short time with only one first line squadron (801 Sqn from 1947 until 1951), but remained in significant numbers with second line units until 1955. A twin seat, radar equipped night fighter, the NF.22, was also produced, serving again with only one front line unit, in this case 809 Sqn.

The Blackburn Firebrand was conceived in the early 1940s as a short range fighter to replace the Skua and Fulmar in RN carrier service. Powered by the massive Napier Sabre 24 Cylinder  engine, it was also envisaged that it could operate from shore in defence of naval bases.

In its original form, it was a two-seater ,hence its long fuselage.  Unfortunately, shortages of the Napier engine pushed Blackburn to use the Bristol Centaurus instead, with its lower power making the Firebrand unsuitable as a fighter.   The Air Ministry quickly reassigned it as a single seat long range Strike Fighter, to carry an anti-shipping torpedo or 2 bombs and unguided rockets as well as its existing 20mm cannon.   Blackburn widened the fuselage (and wing span) slightly to accommodate the torpedo, increased the size of the fin and rudder to improve longitudinal stability and the Firebrand entered service just after WW2 ended.

Valom’s earlier Mk.2 Firebrand kit is an easier and mor epleasant build than the Mk.5.  With its massive long cowled Napier Sabre engine, from some angles it looks like a Seafire “that works out”.  Link to build page