<<Link to previous month  Link to Next Month >>

Whenever anyone talks about cancelled British Aircraft Projects, attention immediately turns to the BAC TSR.2, whose cancellation in 1965 after its first flights left much of the UK military aviation industry adrift and directionless. Whatever you feel about the TSR.2, the consequences of its demise were significant.

However, it was not the only advanced British project that fell by the wayside. Government funded BAC's main competitor, the Hawker Siddeley Group had a similar flagship project, the privately developed Hawker P.1121 (anecdotally named Hurricane or Cyclone), loosely based on the same Operational Requirement (OR.339) for a high speed strike aircraft and powered by a massive single DeHavilland Gyron engine of 25,000lbs reheated thrust. At the point of its cancellation by Hawker in 1958 (unlike TSR.2, the Government had not ordered the P.1121 so did not cancel it), a full scale mock-up of the P.1121 had been completed and construction of the first airframe was reasonably advanced (its sad remains now rest at RAF Cosford). 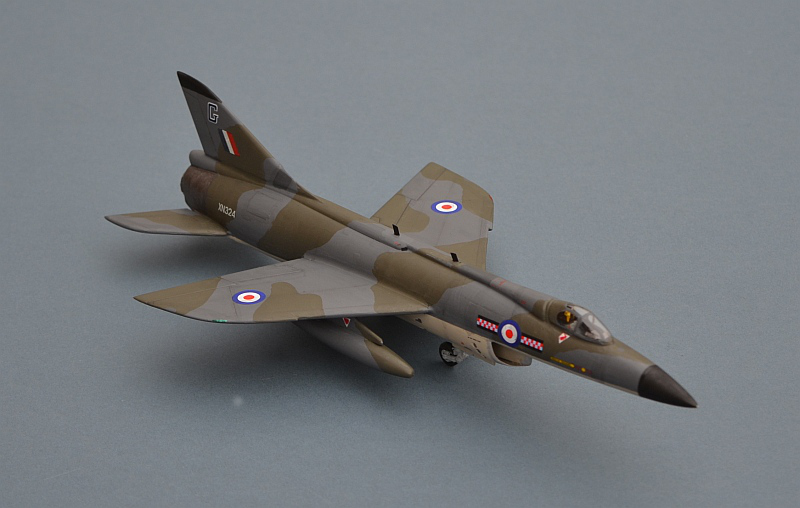 .In reality, lead designer Sir Sydney Camm's P.1121 had never been a credible contender for OR.339 and had originally been designed for a different requirement, OR.329 whch called for a long range interceptor. Although it was an astonishingly elegant design and expected to exceed mach 2.5, the RAF showed little interest, complaining that Hawker had simply produced a vastly updated version of the Hunter, a general purpose fighter aircraft with an unclear role in modern specialised air warfare. This was largely true; Hawker's focus had been on the airframe and they had not integrated any specific weapons systems, simply adding wing pylons to hang "something" under. Plus, its climb rate to height was mediocre. In any event, OR.329 was cancelled in 1958 following the infamous 1957 Sandys'Defence Review and its confident assertion of the end of manned fighters in the missile era. The Gyron engine was a parallel development for OR.329 and was cancelled at the same time.

Sensing an existential crisis, Hawker then grasped at every opportunity they could find, but specifically the long range supersonic strike role of OR.339. Thus, the P.1121 quickly became a nuclear bomber (with a weapon hung under a wing).   The Rolls Royce Olympus was quickly identified as a potential replacement for the Gyron, albeit less powerful in its current state of development.  But, with no internal bomb bay (contemporary nuclear weapons could not be carried externally at supersonic speeds), designed to operate at medium height and based around an experimental engine with an unclear future, it lost the competition to a combined Vickers/English Electric design, the much better known TSR.2.

In retrospect, the P.1121 was remarkably similar in its multiple roles to the aircraft that the RAF eventually received, the F-4 Phantom II.  In that sense some have claimed that it was far ahead of its time and that its role flexibility would have made it a better long-term prospect at home and for export than the highly specialised TSR.2. This may indeed be true, but a lack of purpose and non-existent UK government support doomed it from the start.

The Hawker design team quickly moved on to the next imminent politically driven disaster, the unhappy P.1154, finally hitting the mark with the far more modest P.1127 Kestrel and the amazing Hawker Harrier.

As the fateful year of lockdown draws to an end, with a very real prospect of more in 2021, I felt it might be time to move away from "comfort builds" of familiar kits on to try something a little more difficult. After all, I have the time.....

So here we go, it's a vacform - aaaargh! Like many modellers, I have an inbuilt fear of vacform kits. Whilst I do enjoy building them and get a real sense of achievement, they are just too easy to get wrong!  As such, what-ifs are an ideal subject, since you can apply a little individual initiative when something doesn't go right and apply some scratch built detail to distract the viewers from the residual faults (that's precisely why my P.1154 has an air ram generator).

This is a Maintrack Models "Project X" issue of this kit from the 1990s - more recently (2019) they have been re-released by Whirlykits with some nice resin detail parts to replace the more compex assemblies. Although they were never cheap, Maintrack's vacforms were definitely the pinnacle of the art, with good shapes, suitably thick plastic sheet and remarkable surface detail.

Best of all, once the parts are neatly trimmed from the sheets, they actually fit together, are symmetrical and reasonably well thought out.  I still wouldn't describe them as easy to build, but this is about as good as vacform gets.

My approach to vacforms is fairly conventional - I mark around the parts with a ball point pen, then trim closely to the lines with a sharp pair of scissors, finally sanding on a flat sanding surface until the edge matches the line. It is a bit of a trial and error process, but it works well.

Unlike with my P.1154 build, this time I did fit the bulkheads for rigidity (and remembered to build a small containment in the nose for some lead shot). The cockpit is very simple, but ripe for scratch detail additions. The white metal ejector seat finishes the cockpit nicely, with some simple fuse wire ejection handles added to the top of the seat.

I also added some blocks of thick square sprue strengtheners to the inside of the fuselage where the wheels would attach. This didn't work quite so well. Although I managed to drill the holes as planned, one of the rear strengtheners sprung off internally as I inserted the undercarriage leg (cue some difficult rework), then I found that the re-attached landing gear wasn't level (some more rework).  The nose wheel, inexplicably, I fitted at the wrong end of the bay. This was a major boo-boo and I have no idea how or why I did this - the drawings are very clear.  Unfortunately the robust strengthening block for this one did not spring off, and the leg is so firmly attached within, that I couldnt remove it to reposition without major surgery and severe risk of damage to the rest of the kit. Oh well, its a what-if, so no-one can say its definitely wrong !

Perhaps the most difficult part of this kit is the distinctive air intake.  It looks good on the sheet, but fitting it together and then smoothing into the rest of the fuselage is difficult. Sensibly, this is now supplied as one of the resin parts on the more recent kit issues.

For the tailplanes and wings, I went for a simple butt joint. Attaching spars or wire strengtheners always sounds like a good idea, but in my experience it is exceptionally difficult to line things up and get the wings level.

The plastic is actually quite thick and strong, so sanding the wings until I was happy with their fit, then fixing directly onto the fuselage with liquid glue worked well for me.

I then added some Milliput putty to fair things in and tidy up afterward.

The selection of white metal parts supplied with the Maintrack issue includes a tailpipe.  Unfortunately this is a very simple and crude bucket shape, so I abandoned it for a part from my spares box, an ex-Airfix Vigilante tailpipe.  This is of course sized for a J-79 engine, so is a little small, but looks the part and adds interest with some variable nozzle petals.  Undercarriage parts are likewise very simple, but good enough for the scale and suitably strong.  The main bays are moulded into the fuselage on the Maintrack issue (later ones have more detailed resin).  I added some simple door jacks (stretched sprue), again to add a little distracting detail!

The canopy gave me some grief and did not fit well. This is partly because the cockpit coaming has a dip that did not seem to match the clear parts and the rear coaming seems to be a little too large in diameter (which could, of course, simply be my trimming and joining of the fuselage halves). Some Micro Klear filled the gaps, but it is a little disappointing.

Like the RAF, I had real difficulties deciding the aircraft's role and thus its armament. I do like my "what-if"s not to have any obvious "incredibilities" and this ambiguity was the P.1121's weakness in real life!

There is no internal bomb bay, by design. Maintrack provide a reasonable vacform representation of a partly recessed Red Beard nuclear weapon, but would have you attach it to the fuselage underside in an area that would not have been structurally capable of holding it.  Ground clearance might also have been a big safety issue in that position; Red Beard was notoriously fragile and could explode (non-nuclear) if subject to a shock. More importantly, the bomb would sit right over the lower air-brake, which clearly wouldn't work, not to mention all the critical systems already in that position preventing a recessed mounting.  I considered adding it aft of the brake, but there is very little room to do so and zero ground clearance, plus the buffetting from the brake airflow would have been very dangerous.

Various on-line pictures show a Red beard carried on an inner pylon, but in reality any external carriage would have severely restricted the aircraft's speed (to avoid thermal and shock damage to the weapon), all of which would make the very fast P.1121 seem a bit superfluous and hamstrung. Two Red Top air to air missiles seemed more credible, even though the P.1121's limitations as an interceptor were very clear. The aircraft also carried built-in rocket armament packs on either side of the fuselage just aft of the cockpit and similar to the rocket packs beneath the Sea Vixen fuselage.

I guess these would have helped, but as an interceptor it is really not clear how the massive P.1121 would have been any more effective than a Lightning!

Maintrack supply some basic but well printed decals for an aircraft of 54 Sqn, with some credible serials. As supplied these are the type that you apply dry (like stickers), then remove the paper backing with water. These work well in most respects but it is not possible to re-position them once attached, so they need some very careful and accurate "first time" placement.  I used the serials and tail flash (which was a little transparent), but decided to go for something a bit more interesting from my spare decal box for the rest. In the end I chose 603 (City of Edinburgh) Sqn RAuxAF; a good choice to end 2020, the Battle of Britain 80th  Anniversary year, since 603 were the highest scoring squadron of that battle.

All in all, I really enjoyed this build and the end result is interesting, almost unique and suitably personalised.  There were a few frustrations along the way and it took much longer than one of my normal builds (even during lockdown).

Nevertheless, I am really pleased with the results and can add another important bit of British Aviation history to my "Could Have Been" collection.  The old Maintrack vacforms really are some of the best and if you've never tried one, they or their successors are a good place to start. 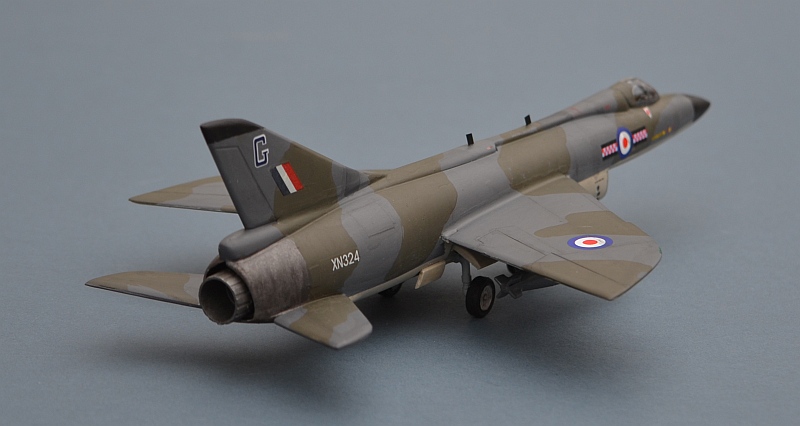 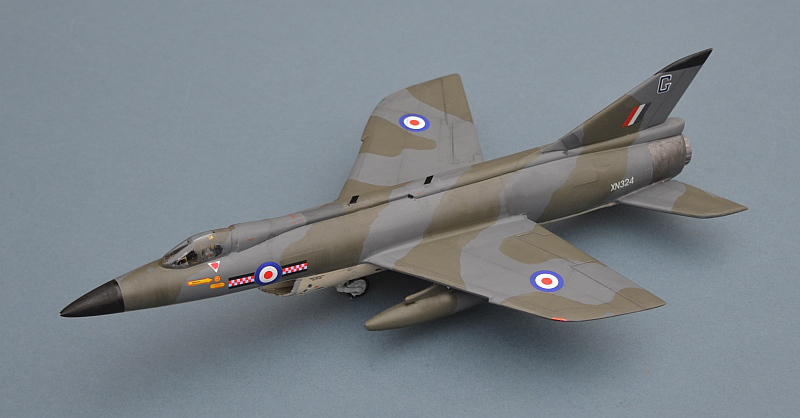