Between 2009 and 2015, I have set myself a general modelling theme based on selected 70th Anniversaries from WW2.

Academy 1/72 with own decals

Academy's Avenger kit is recommended, as an easy built with superb fit and nicely judged engraved detail. It is clearly based on the old FROG Avenger, which is no bad thing. Indeed,although the sprue layout is a little different, the parts are largely interchangeable, with only the very slightly more detailed cockpit and engraved detail discriminating between the two; the Academy kit even has an old FROG-style stand! Better still, FROG intended their kit as a British Avenger II from the start, so the Academy kit comes with the domed fuselage windows of the British variant.

The only changes I have made are to add some seatbelts, a plastic card instrument panel, radar display and cockpit coaming, plus the wire antenna. The decals are FROG original roundels and fin flashes, plus some home-made serials and the "Wile-e-coyote" motif (scanned from an image on the web, then inkjet printed). The invasion stripes are painted on, using some Scotch invisible tape to mask the lines. No filler was needed, although the engine cowling wasn' the best of fits and needed a little more sanding down than I would have liked.

The LCA Landing Craft entered British service in 1939 and was extensively used during the early war operations, including Commando raids in Norway and the ill-fated Dieppe landings. Originating in a Thorneycroft design, it was built by boatbuilding firms all around the UK, with more than 2,000 completed. With its low sillouette, twin engines and propellors, shallow draft, very quiet engines and armour plating it was ideally suited to Special Ops. Several LCA design features were adopted by the US as part of the much cheaper single engined Higgins Boat LCVP design, however the added complexity and cost of the LCA over the LCVP, plus concerns about the smaller ramp meant that the US did not build their own LCAs.

On D-Day, LCAs were used to land troops on Juno Beach, Gold Beach, and Sword Beach. ROyal Navy manned LCAs also landed the US infantry formations on either flank of Omaha Beach and the Rangers who assaulted Pointe du Hoc. The westernmost landings on Utah Beach and the pre-dawn landing on Îles Saint-Marcouf were also conducted from LCAs.

After WW2, LCAs saw service at Suez, in Vietnam with the French and finally with the Royal Marines in Aden in 1967.

47 Cdo landed on Gold Beach at 09:50 hours on the 6 June. Five of the LCAs were sunk by mines and beach obstacles with the loss of 76 of the 420 men in the Commando. These losses delayed their advance to the primary objective the port of Port-en-Bessin. Leaving the beaches after noon they fought through La Rosiere and dug in around Escures for the night prior to their planned assault on Port-en-Bessin on the 7 June.

Operation Aubery, the early capture of Port-en-Bessin was essential to enable it to become the main port for fuel deliveries to Normandy until Cherbourg had been liberated.

Most available landing craft kits seem to focus on the ubiquitous US LCVP and LCM3 designs used by US troops. However the more sophisticated British LCA was used Britsh and Commonwealth troops on D-Day and made up a greater part of the initial landing force. Kits are hard to come by though and this Armageddon branded kit by the French firm Mach2 is not cheap. As with all Mach2 kits it is a short run mould which requires a lot of tidying up to complete, but builds into a nice example of this very important vessel type.

The LCA sitting alongside my Airfix LCVP

The US made Sherman tank made up in numbers for its technical shortfalls.

The old Airfix Sherman kit builds up very nicely even if its exact variant is rather unclear. More recently it has been released wih a number of nice add-on parts to make either a rocket armed verion or a mine-clearing flail tank. This is the latter, perhaps not the most accurate representatoon, but with a few add-ons it builds up into a nice little model.

I have added a few accessories to busy it up a bit - a metal foil cover for the gun mantlet, spare chain stowages and hull tarpaulins, plus some extra jerry cans on the after deck. I also replaced the rather rigid looking plastic flails with some thick thread replacements and changed the Arm of Service marking to represent the 1st Lothians. Airfix supply some rather plain decals that may be OK for D-Day, but soon after, most of these tanks saw names and numbers applied to the hull and turret which would add a bit of interest.

The Cromwell tank was one of the most successful British designs of WW2. Although still not the most reliable of designs, its good armament, fast speed and low profile in comparison with the Sherman made it popular with crews. Mixed units of Shermans and Cromwells formed much of the armour landed in Normandy on D-Day along ewith the heavier Churchill infantry tank.

This is the second of my quick-build Armourfast Cromwells, the other having changed into a Royal Marines Centaur some years ago! 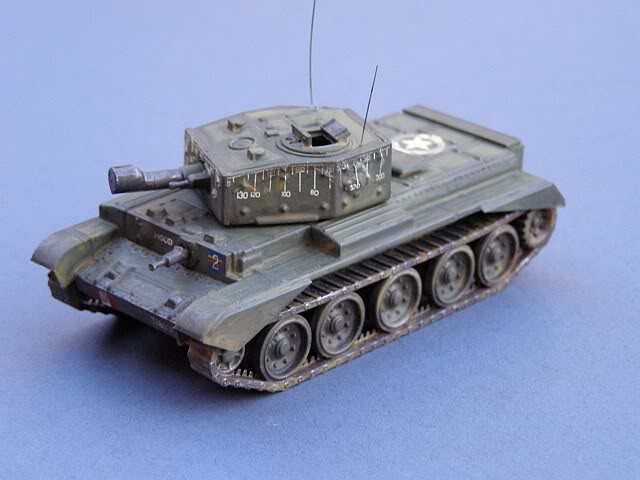 Link to previous month Link to Next Month

Background Image: This restored Grumman Avenger in D-Day markings is a regular performer at airshows.