Between 2009 and 2015, I have set myself a general modelling theme based on selected 70th Anniversaries from WW2.

Frog's Hellcat was first issued back in 1971 and in many ways it shows. The kit is typical FROG; well moulded in chunky thick plastic, with a good basic shape but little fine detail, it makes for an enjoyable build definitely but has its limitations. In particular, the undercarriage legs are far too short. I started building it gear down, but they looked so wrong that I removed them and changed ot my first "wheels up" build in about 20 years!

Other than that, I substituted the very basic pilot figure for an old Airfix one, helping to hide the empty cockpit and changed the kit fuselage roundels (which were slightly out of register) for some Modeldecal ones - other than that the 45 year old decals (transfers!) worked perfectly well.

This is a quick build of the Hobbyboss easy assembly F-4U kit. In this case I boobed somewhat with the version/variant, requiring a few more changes than I had planned. Nevertheless, although very simple, this remains a very nice kit; even its basic cockpit can be made to look convincing with a little paint and a spare instrument panel decal! Another Airfix pilot has conveniently filled the remeaining gaps.

Vought used approximate "substitute" colours to paint their RN aircraft (whereas Grumman used "equivalent" US paints for the Hellcat), so I have used a lighter grey, olive drab and a more grey sky shade than normal;

Have a look at my "RN Props" pages for details of my other WW2 Naval aircraft models including the types shown below, all of which participated in the Tungsten raids.

Hellcat, Barracuda, Corsair, Seafire and WIldcat all from Operation TUNGSTEN 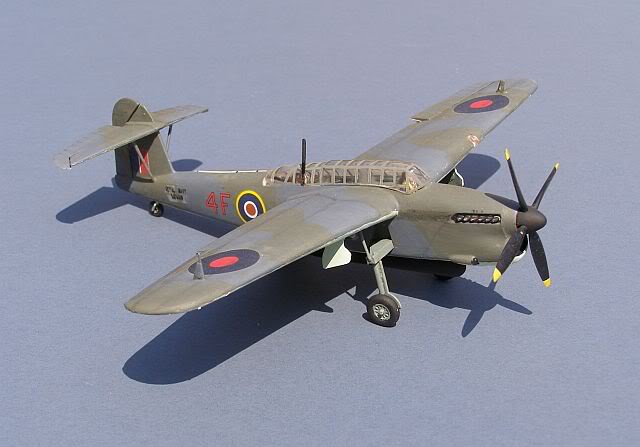 A Barracuda of 831 Sqn, HMS FURIOUS that participated in Operation TUNGSTEN

Link to previous month Link to Next Month

Background Image: © IWM (A 22649) Early morning before the raids, onboard HMS EMPEROR looking back at ViCTORIOUS