The last build of the year, with various aerials added, IR Jammer beneath tail, new optical sight, BERP blades and reverse tail rotor.  HOT launchers replaced with scratch built TOW launchers.  Spelling out “Royal Marines” in individual letters drove me nuts.  Then, the matt finishing coat looked all wrong, so had to be redone in satin.  You cant see it, but the pilot  & observer are in desert flying overalls, intended to represent the UK-US-Aus amphibious assault on the al-Faw peninsula in 2003.  The Airfix Lynx kit is good (in all its versions), but the lack of wire intake guards is a significant shortfall.  I have fitted aftermarket PE metal ones to one of my other Lynxes and they look OK, but not quite there yet.

Reckon I can churn SHARs out in my sleep now. This one completes my set of 3 FA2s, one of each Sqn.  New nose, tail insert and wing roots.  Large wing tanks are cut down Airfix Hunter sets.  Most markings from Model Alliance.

This e-bay cheapy was going to be the 899 Sqn FA2 above, but turned out to have several key bits missing (cockpit interior and windscreen.) After scratching these, I wasn’t entirely satisfied, so decided just to finish OOB, except for the twin Sidewinder launchers.  Still prefer the ESCI/Italeri SHAR kit and Fujimi Kit, of which I have numerous examples, built and unbuilt.  I intend to tackle more of these for next year’s Falklands 25 anniversary.

Bought this about 20 years ago;  another 2 in the stash.  Just fancied building it this year.  Lovely little kit, but needed a lot of scratch building in the cockpit.   Nice glossy Future/Kleer finish over light oily wash looks a lot better in the flesh than this picture.  Next up in 2007, the Suez example I meant to do in November for the Suez 60thanniversary.

Realised the Seahawk Stash was getting out of control, so built a few this year.  Haven’t paid more than £2 each for any of them so a great kit to practice techniques on. Rescribed, oily wash and Future/Kleer topcoat.  Now an expert at scratching Seahawk cockpits, but once again my attempts to bore out the gun ports went awry (the stbd fuselage is definitely much thinner than port).  There seems to be a wider range of colourful Seahawk markings than for any other UK aircraft (except possible the Lightning).  Markings from various sheets.

Just fancied the look of this one after the Viggen below – picked up from a “rummage” box at a modelling show (FAAMuseum).  Its definitely the Italeri mould, but Airfix supply it with less in the way of armament.  Good kit though.

Had one of these when it first came out.  Another cheap E-bay buy, unashamedly re-living my youth and a chance to do NMF once more.  Didn’t fit at all well and doesn’t photograph well.  The NMF looks quite good in reality.

Picked up for a song on e-bay, but thought the supplied grey markings were too boring.  Had the “tophatters” on a Modeldecal sheet which looked ideal.  Bit of a shambles with the undercarriage though.  Whilst attaching the legs, I accidentally glued the wings shut.  They move again now, but are somewhat wobbly !

Very pleased with this, which definitely took less than a week to build.  I intend to do a Revell one in EDSG and white sometime soon, so this old Airfix one in the stash became the boring grey version.  Minimal modification to make a GA11 (remove nose, bits of tail, Sabrinas). Used a pencil to mark out panel lines and India Ink fineliner pen for other stains; very effective.

Just a repaint here of a kit I built in the late 1980s – obtained the Model Art decals at a model show so gave it a repaint and general spruce up.   Key panels marked out in pencil again.  That blasted white window is annoying though!

This is a very old kit, built by me in the early 1970s(must have been about 10yrs old).  Poorly built, but with sentimental value !  Has been repainted twice already. Repainted this time from a very dark grey to the correct EDSG.  I have now obtained another set of the Modeldecal markings so may redo the whole thing next time.

Saw lots of these for real in the mid 1980s in the Barents Sea.  Picked this up for a song (under £3) from my local model shop, which was selling someone’s old collection .  Box mouldy and split, no instructions or markings.  Lovely kit; very highly recommended.  I did a lot of scratch building inside, so I could leave the doors open.

Another “cheapy” from Bath Model Centre.  Box mouldy and transfers long past useable.  What a truly horrid little kit – nothing fitted together.  Still, it looks OK, was very cheap and filled a hole in my collection.  Done as a Vichy aircraft opposing the RN invasion of Madagascar.

An e-bay cheapy.  A rather crude kit, but interesting nevertheless as a representation of a crude copy of the Harrier.   Not very accurate.

Another Seahawk.  Nearly as many of these in the stash as Harriers.  Built straight out the box and rather disappointing.  Developed my cockpit scratch building though; some day soon I will have the nerve to do one of these with the Falcon vacform canopy open so you can see my handiwork.

Love the Starfighter.  Only ever seen real ones in Italy, but what a lovely noise they make !   My Daughter bought a “Tiger Scheme” one at the Yeovilton model show and whilst helping her to build it, I was very impressed by the kit, so much so that I sourced one for myself from e-bay.  Had to be a NMF USAF one, although in retrospect I have seen a picture of a US Navy one from China Lake that would have been even better !   I really enjoy doing NMF aircraft;  all hand brushed using home mixed Humbrol paint, with many coats of Future/Kleer on top.

A repaint here.  I was backing the X-32 and had done a RN version in advance of the down selection.   I rushed out and built this after the announcement, but it never looked quite as good as its Boeing rival.   Having got the SHAR decals out of the stash for the FA2 below, I decided to update this one as an 801 Sqn aircraft from HMS Prince of Wales (hence the “W” on the tail).  Briefly considered redoing the fan doors to represent the production version, but decided against it.  Maybe next year!

2006 was the last year of the SHAR, and as a serious SHAR enthusiast, I decided to do one in the final 801 Sqn Omega marks.  Model Alliance brought out their UK Air Arm Update shortly afterwards;  their Omega is in front of the trident and wing, which is wrong.  AMRAAMs from the Italeri NATO set;  pylons are reversed and trimmed wing pylons.  Wing tanks from an Airfix Hunter, chopped in 2, shortened and rejoined.

My 3rd one of these – one with a Hercules and another on its own, both in the 1970s.  When Airfix re-released it in January, I just had to have another one.  Drove me nuts though.  Poor fitting boosters, grey plastic that the white paint wouldn’t cover (there are about 4 coats on it).   Not seen in the picture are the trailer, Landrover and crew (including the tiny Guard Dog that my kids love).  Rather bizarrely an architectural salvage yard near us (in Street) has a full size one of these in its yard (alongside a Bofors 40mm mount).  Not quite sure why?

A good start to an excellent year.  Started at the beginning of Xmas leave and finished in January (a 4-5 week build).  Based on a real BAC proposal for a Sea Vixen replacement that never left the drawing board.  I lavished significant attention on this “What If” and am really pleased with the result. 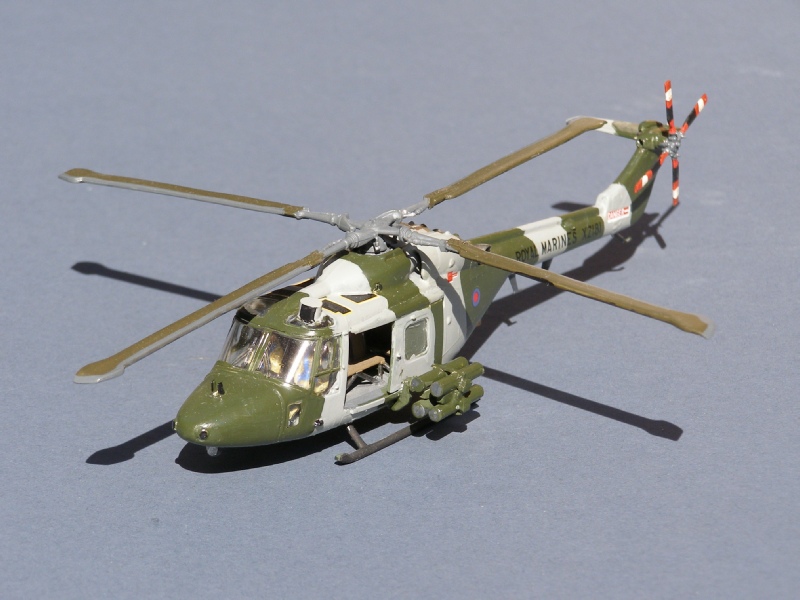 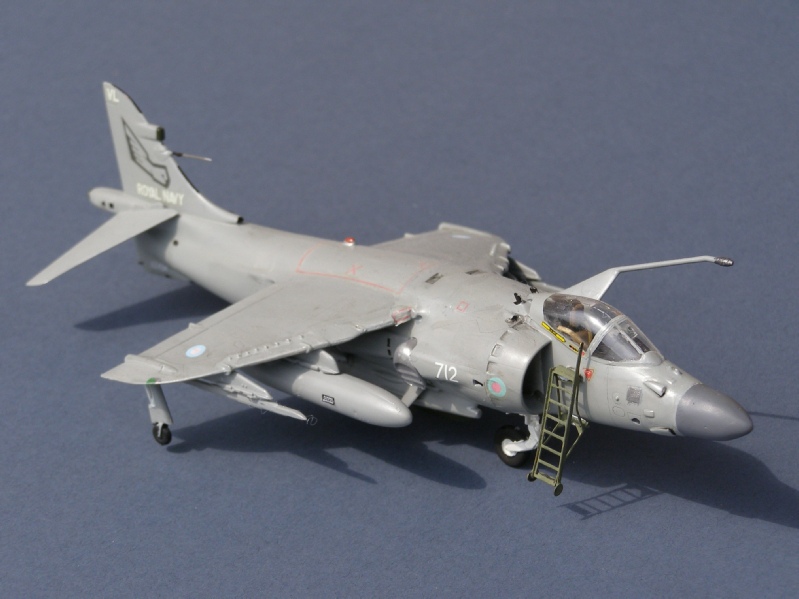 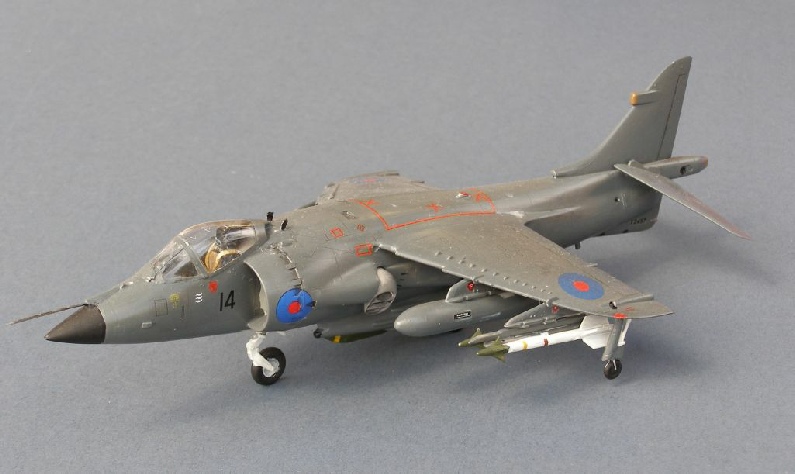 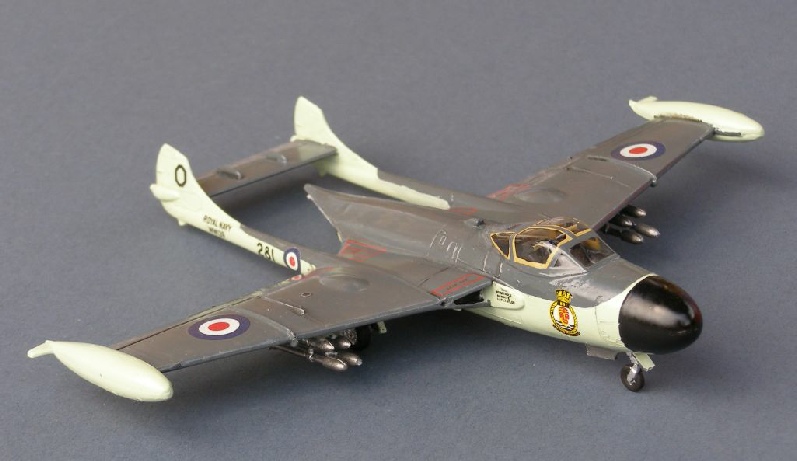 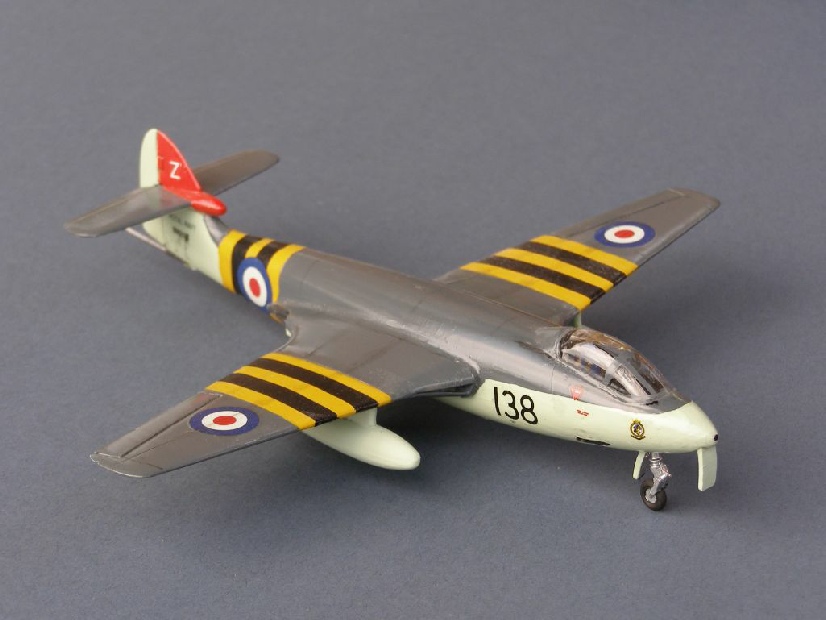 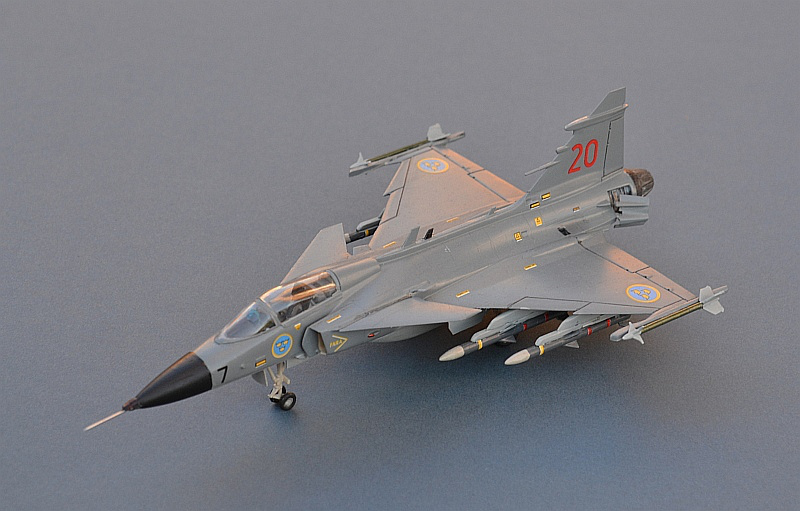 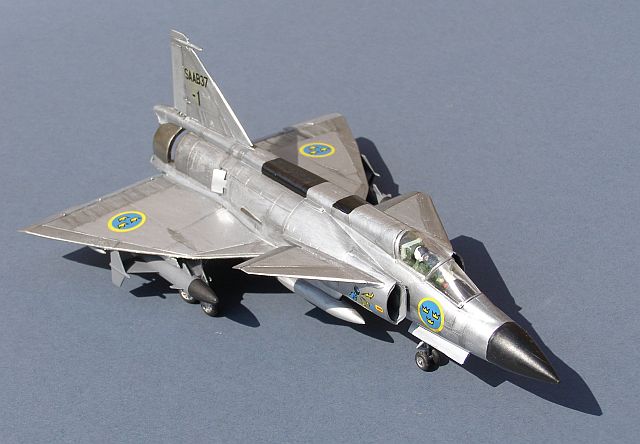 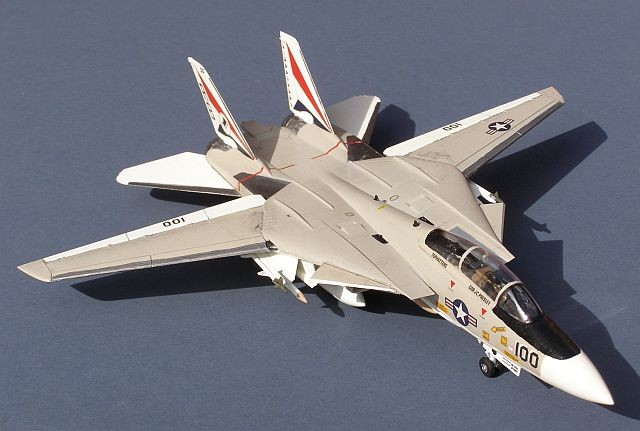 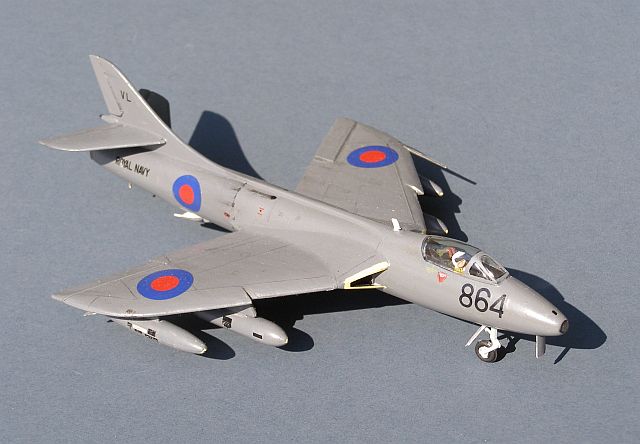 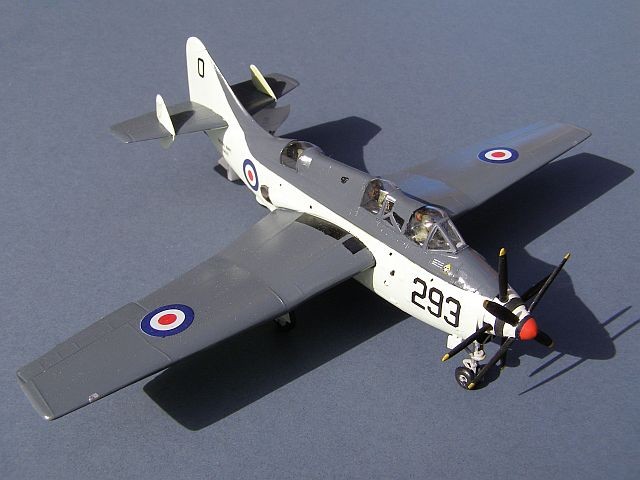 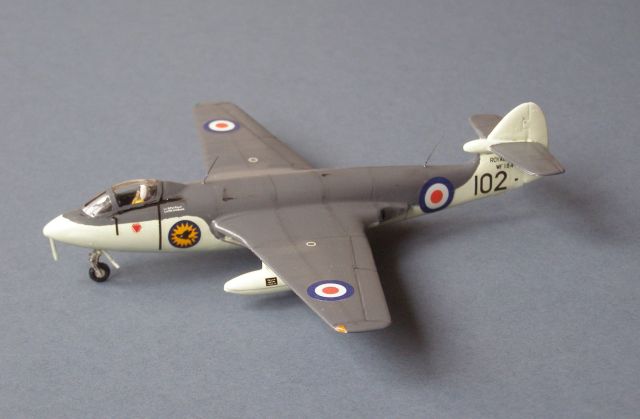 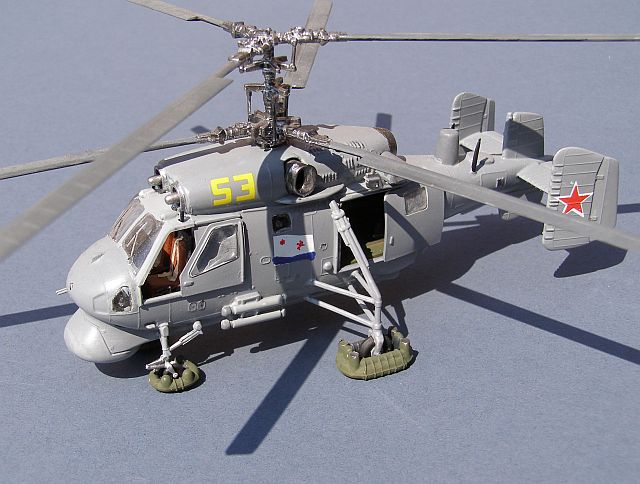 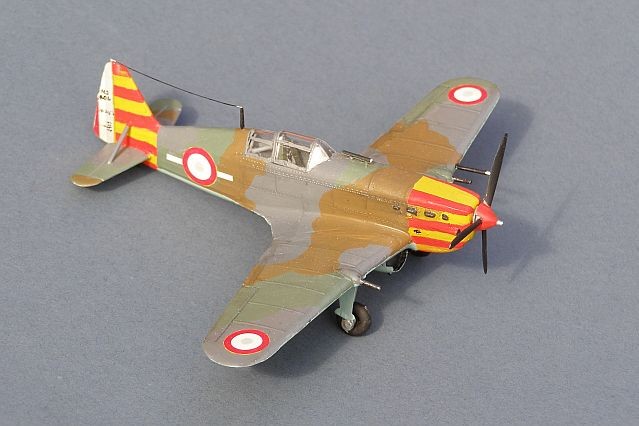 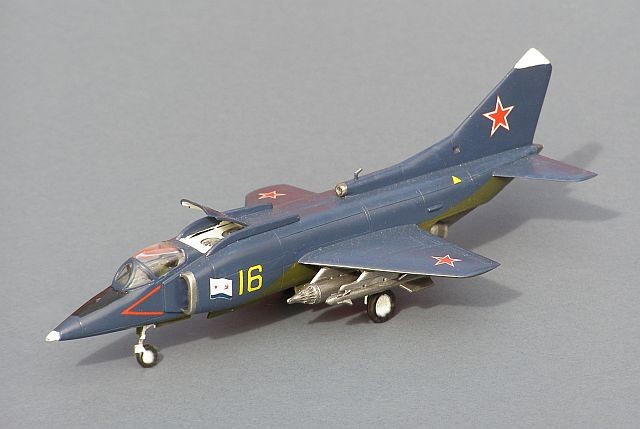 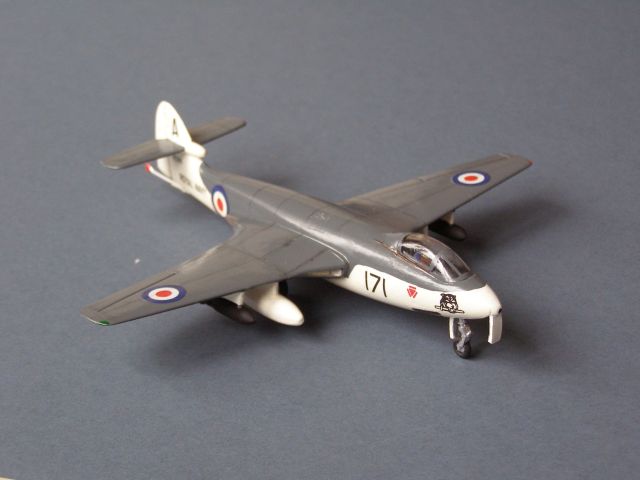 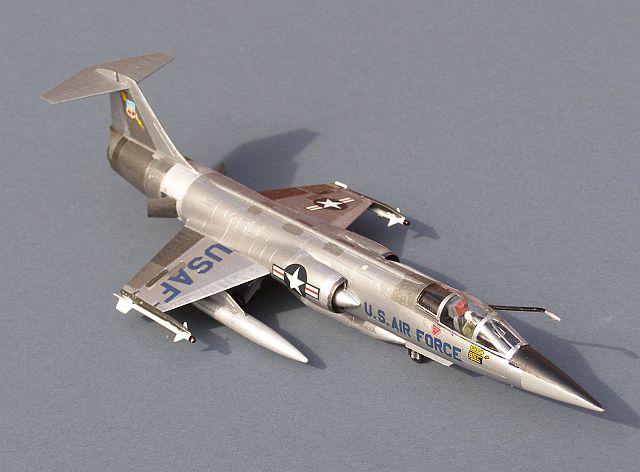 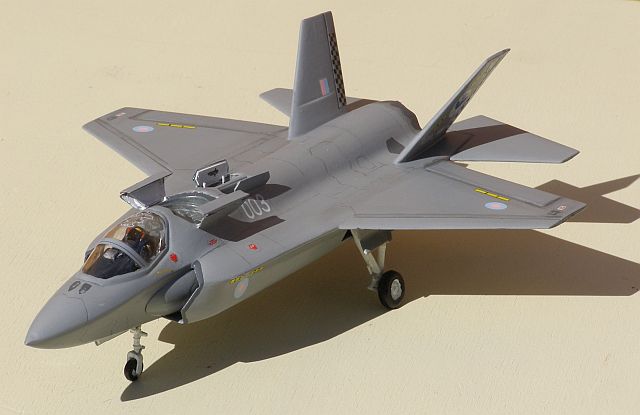 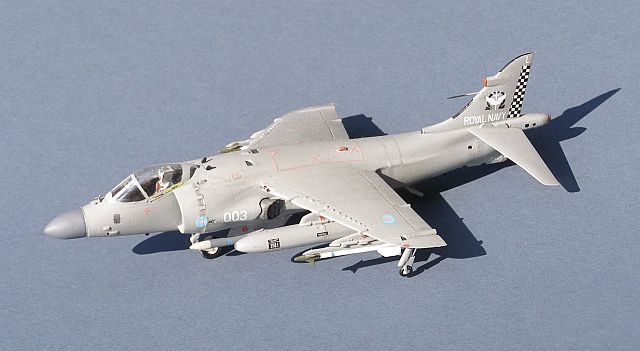 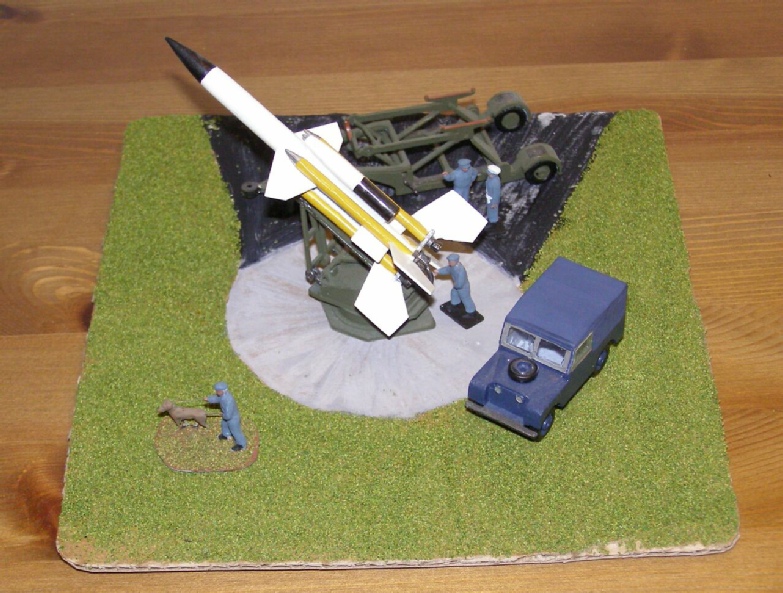 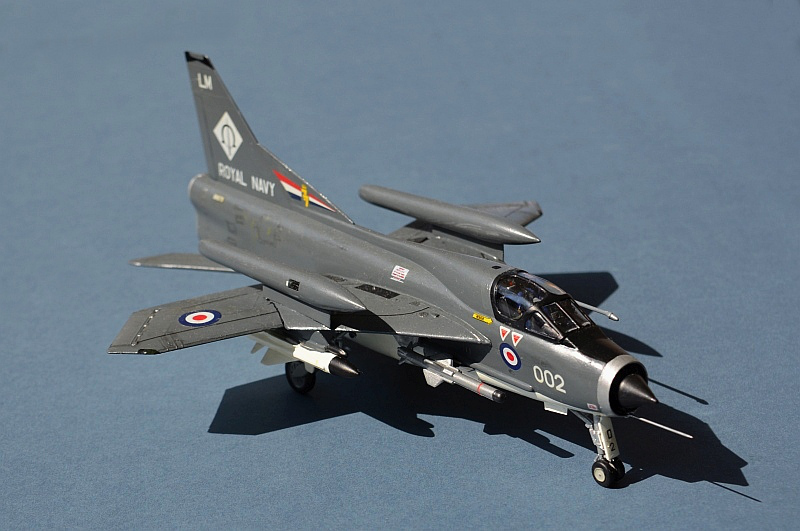